The black swan, or how to learn to cope with the unexpected, part 2 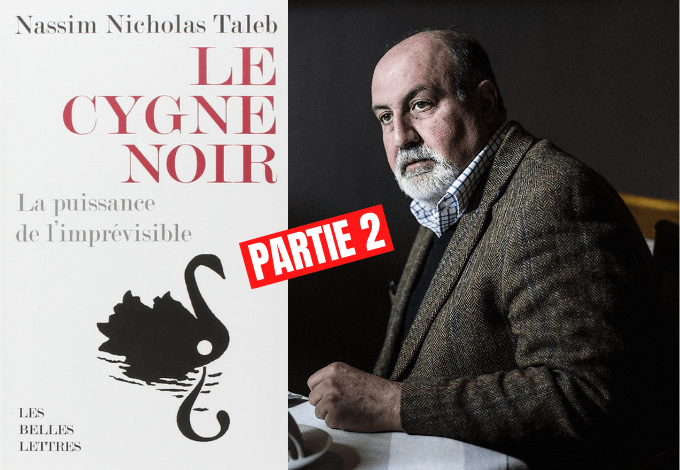 In a first article, I introduced the thought of the statistician and essayist Nassim Nicholas Taleb, famous - paradoxically in view of his convictions - after having predicted the 2007 crisis. He theorised about the existence of 'black swans', those unpredictable and unlikely events with an extreme impact on our lives.

The attacks of 11 September 2001 and the Covid-19 crisis are examples of this. These black swans have changed the course of history. The corollary is that they make it impossible to predict the future: structural developments are caused by bursts that cannot be anticipated.

In this second part, I focus on two key questions. First, how do we recognise situations of high uncertainty? And second, once recognised, how do we adjust our decision making to the unpredictable? The sections of this article are divided as follows:

- Extremistan' and 'Mediocristan', two countries that are at odds

- Extremistan, an environment of extreme inequality and unpredictability

- Conclusion: how to adapt to the existence of black swans

"Extremistan' and 'Mediocristan', two countries that are at odds

How can we recognise situations that are subject to high uncertainty and therefore to "black swans"?

To answer this question, Taleb created two imaginary countries: Extremistan, a place highly prone to 'black swans', and Mediocristan, which is not very prone. As we will see below, it is all about scalability.

Scalability is defined as the ability of an entity (person, company...) to create an additional unit of value with a low and decreasing marginal cost. Let's take two examples:

1. For a baker, selling each baguette requires the same amount of ingredients. You can achieve economies of scale by acquiring a larger oven or a robot, but each new customer will still cost you a substantial investment.

2. For a startup selling HR software on the cloud (a totally coincidental example), adding a new customer represents an infinitesimal effort, it's a tiny bit of extra computing power on a server. Having 1,000 or 1,000,000 customers does not change the volume of costs (but it does change the volume of revenue!).

Let's take a profession that has been made scalable by the information age (like many): musicians. In the past, musicians could reach a finite number of listeners. They had to travel from town to town to perform. Today, the advent of the CD and then digital platforms like Deezer allow them to reach millions of listeners at no extra cost.

Another example is war.

Environments where scalability is not possible, such as the traditional bakery or plumbing, belong to Mediocristan. Extremistan, on the other hand, is the home of scalable models.

Extremistan, an environment of extreme inequality and unpredictability

The problem with Extremistan is that it is a winner-takes-all environment that produces extreme inequalities. In the pre-digital revolution music industry, a good musician had a larger audience than his or her peers, but quickly plateaued. The largest venues had audiences of no more than a thousand, and the artist could only be in one place at a time. The big guys didn't bankrupt the neighbourhood musicians. Inequalities were modest. Today, with streaming platforms, the best musicians reach hundreds of millions of people. 0.001% of musicians capture 99% of the audience and associated revenue. Artists who are not part of this inner circle cannot make a living from their art.

Beyond the inequalities, the distinction between these two environments has an important impact on our knowledge. In Mediocristan, a very limited sample of data gives an accurate picture of the situation. If I measure the height of 100 random people, I can get a relatively accurate idea of the average height of human beings. Ten times more measurements will hardly change my results. I can easily deduce from the reliable knowledge of the data.

In Extremistan, I cannot deduce rules or predictions based on observations. If I try to predict stock market fluctuations from a random sample of 100 days, I might get some big surprises. Anything can happen in scalable environments, and chance plays a very big role.

To return to our original question, according to Taleb, it is in Extremistan-like environments, very prone to 'black swans', that anything can happen. The problem: in the modern world, most things belong to Extremistan (financial markets, music...) or will belong to it.

How to adapt to the existence of black swans?

For Taleb, our lives are essentially in Extremistan, subject to 'black swans', with the result that the road is not linear but chaotic. History, and our lives, evolve in unexpected bursts. Most of our successes are the result of chance. So, on a personal level, how can we adjust our decision-making to the highly unpredictable nature of the universe?

Taleb suggests first of all to expose oneself as much as possible to opportunities, to positive black swans. Most breakthrough innovations are the result of chance. They are only 'black swans'. Sir Alexander Fleming made one of the most important discoveries in the history of mankind, the antibiotics, by forgetting some of his bacterial cultures in boxes next to his benchmate studying the fungus Penicillium notatum. This is known as serendipity. The strategy for discoverers and entrepreneurs is therefore to create as many opportunities as possible for these unexpected events. For example, by getting involved in many side projects! It is in these contexts that we often meet a person or an idea that changes our life.

The second important recommendation is to include a large margin of error in our predictions. Widening the range of possible futures allows us to be more prepared. Let's say you go on holiday to a distant country. You are less likely to be caught off guard if you don't trust the weather predictions by taking clothing for all conditions. Conversely, many companies fail because they do not include a margin of error in their cash flow projections. Scientists studying climate change have understood very well the importance of forecasting all scenarios. To overcome what is likely to be humanity's greatest challenge, we must be prepared for the worst.

Finally, and this is a conclusion that is in line with the first article, the most important recommendation is to be very humble. Confidence in one's own genius and predictions is the greatest danger when it comes to making decisions in an uncertain environment. Conversely, caution and scepticism are our best allies!